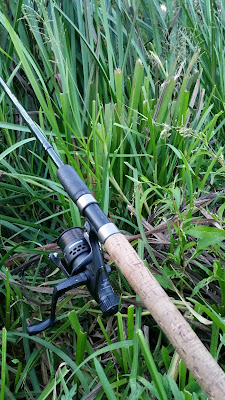 Today was the first in a planned canal campaign devised only to put some points on the bloggers challenge scoreboard in the hope that three aims could also be achieved :
To my surprise I had no difficulty rising for the first early start of this increasingly autumnal period and, questioning my sanity as I pulled-up, I was barely able to see to get the stuff out of the boot

Travelling light, I did manage to bring the keepnet as I do like to look at canal catches on departing

The mist was thick but not so dense as to qualify for fog, in my estimation, as it didn't soak-in or build-up on clothes or equipment. Chances were, therefore, that eventually the sun would burn it off and it was simply a case of when, as the spot I was headed for would not produce a single bite after sun-up with clear skies likely later

Moorhens, mallards and those dubious hybrids of questionable origin scattered as I wandered through the murk and settled into the swim in a gap in the vegetation no doubt created by previously-moored boaters. I set-up well away from the water in the shade of the tall hedge. All was still and nothing noticeably topped. This being a location where roach will top if they are present it made me wonder if I had peaked too soon in the canal hunt but, as it was likely to be a relatively short session before Mr Blue Sky brought it to a close, it was of no great concern as we would, quite literally, test the water and then decide how the campaign might evolve from there

Flocks of gulls whooshed low overhead as they sought to navigate by visual landmarks given the shroud they had awoken to. Individuals, spilt from the flocks, constantly twisted their necks left and right in trying to keep in touch with their companions. The traditional sounds of the farm were evident but not visible

Bread mash down the middle and lobworm down the inside would be todays 'no holds barred' options. I rarely use anything else these days, though there were a pint of casters left in the fridge which I have been trying to keep healthy since last week for tomorrow morning

Fifteen minutes in on the lift bite method and bread flake produced nothing. Momentarily I wondered. When I have fished here before, on three or four occasions, bites have usually come quickly and then fizzled out just as quickly as there aren't too many bread-taking fish here but they are usually of a good size.

I started to drop free-lined lobworms over the near shelf to my left. A first in terms of canal method, and taken from my recent river findings, but more in hope than expectation

Then, tempted already by the flask, I looked up to the see the lift bite had failed as the float was gone and struck at fresh air. 'Crayfish' I thought, often the cause of a rig being slowly towed under and not the greatest of omens so early in proceedings

A runner came by and we exchanged pleasantries, his with a breath of determination, mine in a cloud of uncertainty. The freelined rod twitched and as I struck an eight ounce probable bronzeXsilver bream hybrid shot out of the water and into my lap. I had forgotten this was the canal and that I had a 1.25lbs t.c. Avon in my hand

Then the float lifted, a fish was on, and comedy and chaos ensued as both rods produced bites too quickly for comfort for a five minute spell

The first fish to the float fought well. I was not as necessary as normal to be careful, with the overhead light levels low and the water colour perhaps a touch too cloudy for respectable bread fishing, and it was just as well, as my lack of recent experience with the tackle left the style and skill with quite a number of improvements to be desired

It was a roach, silver flash then red fins, and a good one. I knew if I caught roach there was a good chance they could exceed a pound here and when this one lay on its side in that 'okay, you've got me' pose it was well over that target. In fact, as I lifted it out, I guessed around one and a half pounds but, as I started to handle it to remove the hook, it's rear end was a touch empty and a reading of 1-5-8 on the scales was really no surprise

This was a silty length of canal and any boat traffic would not help at all. It would kill the bread line and left me with only the near shelf to go at, so I fed it again and put the float rod among the wilting, browning loosestrife. At the same time, with the canal now towing this way, then that and back again, resembling the hokey-cokey, the decision was made to add a swan shot link leger to nail it down

A magpie laughed at me from a fencepost and a chiffchaff bizarrely struck up it song from a hawthorn through the mist thirty yards to my right. Perhaps a young one practising for next season. I wonder if it'll remember the words by next spring? Compared to many other species it should have a good chance. Only two words after all, albeit if he gets stuck only one of them is in the dictionary

Coffee was welcome at this point and that which propelled from spout to cup perfectly matched that served-up by the rotor of the 'pleasure' boats. Time to take stock. I tidied-up. Then I fed another bread swim 25 yards to my right and went to fish it. Nothing

The boats lulled and yet it was still before breakfast. Something made me take the lead off the line again and revert to a free-lined worm. Instant action. Obviously the natural fall of the bait was essential. If only I'd known that thirty years ago!

A bite. A strike. A small zander came to hand. My first the season and worth a handful of points maybe.

Then the line tightened again and the rod arched over before I could grab at it. The reel had been left to backwind inadvertently and the handle, and rotor, were fizzing round, painfully rapping the knuckles of my left hand and the ends of my reel fingers as I strove to do something to resist the challenger

As I started to gain some composure, species ran through my head. Loosening the clutch and engaging the anti-reverse gave some degree of contact and, as the drag was adjusted, I became aware of a frantic head-banging from below. As I tightened further the head movement became interspersed with surges, taking more line

I settled for a 5 to 10 pound space invader and set about trying to land the worthy opponent yet half expecting the line to part on its sharp teeth, but, bearing in mind this was my river rod and reel, it was loaded with 5.6lbs line straight through to an 8 specimen hook, so I was in with a shout if the hook hold was conventional and the line was not being frayed

As I tried to subdue the monster the head-banging became increasingly severe the greater control I achieved. I walked ten yards to my left to shorten both line and odds. As I eventually started to feel like he was mine I became increasingly bemused by the head action. What fish could possibly move its head about that much unless it really was so huge. I could not really make sense of the situation. It was fighting like one might imagine a sea serpent would. Then it's white side flashed underwater. Zander, yes, it must be. Too pale to be anything else

Then it's smiling little mouth and tiny eye appeared and yes, my god, it was a snake! Almost.

The biggest writhing colossus I have ever witnessed, and it wasn't keen on daylight.

Wriggle and squirm it did and there I was with my canal landing net feeling utterly inadequate, baffled and excited in the extreme, all at the same time

I grabbed the net and shoved it into the margin from whence massive eruptions of silt and leaves rose and gave clues to the true enormity of this beast. Then I saw the whole thing. Keeping it off the bottom was the answer, but then - solid.

I gave it some slack. We were in again!

I tried feebly to get the net under its head but it was futile. However watching the way it contorted I estimated that if I lunged at the right moment I could have him.

"NOW!" appeared in my head and now it was. In, completely coiled, into the shallow net. Yeehaar!!! I think I said.

Dragging the net towards the bank I lifted at the last minute and surveyed this magnificent old eel. Back from the Sargasso who knows how many years ago little bigger than the lobworm it fell for and preparing over the years its physically almost indestructible body for the return trip

From the back issues of my memory I recalled that eels don't wriggle if they are on their back. As chance would have it the tiny net kept it neatly in that position as I fretted restlessly around the bank like a spaniel expecting his tea

What should I do, I needed to record the moment and savour it. It should not be like my first final and not remembering anything due to nerves. Pleasantries were now exchanged with what I should call a fish but the description doesn't do it justice. It didn't look like a fish. It had a certain aged wisdom about it. It seemed to know it wasn't in danger and that it was merely a question of time before either I released it, or he got bored and released himself

A narrow-boat passed and Mrs Tripper was gobsmacked, a state I have thought about imposing on boaters many times in the past but not in this manner

After the celebrations I slipped him back a few yards along to my right and he immediately swam, calm and determined, into that turbid world to resume his life as though nothing had occurred at all

Perch and zander ensued and soon it was time to head for home. Just over three hours' canal fishing and just under twelve pounds of fish, less the eel, to admire at the end, though I hadn't noticed the net had become detached from its spreader during the boat traffic and so they went back a touch less pristine than I would have wanted putting a damper on the conclusion I must say 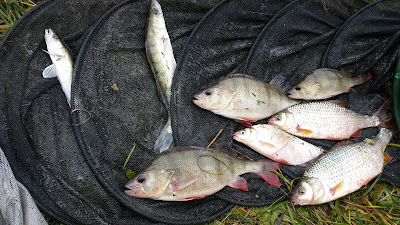 So the three targets were certainly hit today as I head off now to add points to the board and see where that leaves things. Hopefully with some slack to commit some more time to stillwaters before it gets just too cold to stomach that option

Well the casters didn't have much impact but a second hook carrying a fresh whole lobworm, quite the thing at the moment it seems, upped the perch p.b. yet again from The Stillwater 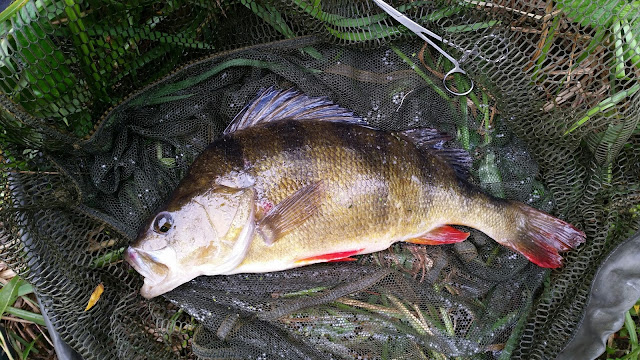 I do love this time of year