Gold Mines and The Wrath of Zeus 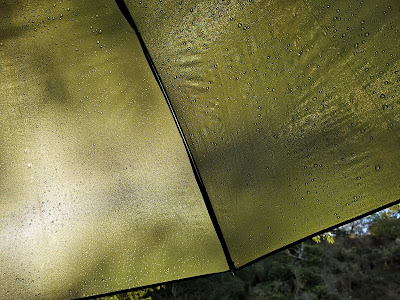 The recent distinct chill on leaving Chez Flannel signals the start of the Bloggers Challenge proper in the vortex that is the space between the ears.

A change of rules this year, and so far it's proven quite intriguing.

If someone catches a fish bigger than the previous best of that species it gets 100pts, and the prev best a %age of that new top weight. So, covering all regular species right down to bullhead and spread across rivers, lakes and canals, there is plenty to target, year round.

What it does mean is that no one can sit on their laurels and, in fact, for me it's very much been the usual approach of piling fish onto the leader board, no matter how small, and then trying to better them as the year moves on.

In the last challenge of 2017/18 I recall setting a  series of unexpected P. B's but as I was starting that competition with the PB bar set very low that wouldn't have been difficult. Now that they are set, and some have since been further improved, none have been broken to date this time. It's a struggle therefore to pick out highlights but a river tench of 4lbs 3ozs from the Fens and a cracking Grand Union roach of 1.12 stand out at present.

On the downside, perpetual champion, James Denison, has been laid-up by a serious back issue (and, no, that's not an injury caused by old copy of Financial Times) so his challenge hasn't really fired-up as yet but we all know the threat he'll pose when fully functional so it's useful to get a head-start!

The Lady Burton and I recently agreed the impulse purchase of a little 'pre-loved' river boat moored on the Nene which will trigger a serious change of scenery for us on available free days.

The FF&F bus hasn't been to the Nene for thirty-five years but I'm sure it will soon be able to find it unaided. It's far enough away to feel like a holiday, yet close enough for a quick visit or indeed to get back from when The Boy Wonder sets the house on fire.

Nene fishing it seems is very much unchanged from the old days, I'm told. Plenty of small fish, mainly roach and skimmers with proper bream, chub and even barbel in places...and still the odd river carp.

River Angler TV has taken a hammering, and its creator, Mark, has been very helpful in pointing the noddle in the direction of some good tickets to consider, fishing locations and the like.

From this coming weekend the Nene challenge will therefore commence. No preconceived ideas in place, it'll simply be a case of prepare for anything, and be prepared for any thing. The lure of weir pools and backwaters however maybe too tasty to ignore for long!

The marina, one might imagine, would hold good fish, possibly larger than the river from past experience, and so a beady eye-out for rolling fish will be kept. The margins are certainly teeming with one and two ounce fish of various species, much as one would expect in a pool with a gravel base.

----
A Long Weekend on Rising Rivers

Friday:
Arrived to the kind of car park I have a real love of...empty...just after dawn my minf set on bream with the possibility of a barbel or a carp

The early autumn rain earlier in the week had caused a rise and colouring of this most sullen of Warwickshire Avon stretches. The sort of murk, pull and flush that usually triggers those fascinating river bream to feed (please excuse the unintentional toilet metaphor!)

Wandering the field edge looking to avoid dodginess underfoot I became conscious of an unexpected brightness in the air and looked up to find all of the willows where the bream live looking like this... 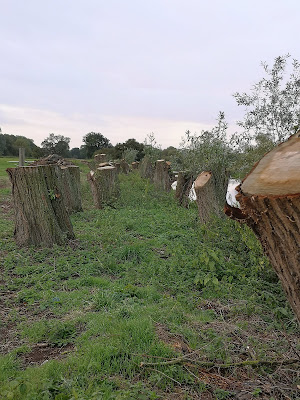 So, immediately stumped as I was by confusion and a lack of ideas, this was the thought process:
"What the...?!"

"That's shocking, all that habitat 'tidied-up' and there was a major colony of that moth here"

"The shoal will still be here though, they never move..."

"...but how long ago were they cut down? It wasn't this week"

"The river could be strewn with invisible branches"

"I'll move back to the unaffected stretch"

The forecast showers hurtled down and the accompanying, surprisingly fierce winds, hurled the rain sideways into the new and remarkably flimsy brolly as the fish, if they were present, stayed in their sleeping bags with their woolly hats on, as The Lady Burton likes to imagine them. Sometimes the peerage rests ever so lightly on her finely sculpted candy floss shoulders.

Yes, I should've gone somewhere else.

Five hours of inactivity later it was time for lunch and to receive the usual unwelcome at the 'community store', where you are looked upon as a criminal while handing over your hard-earned cash if you weren't born within a rod, pole or perch of the door.

After an hour spent eating some very nice smoked salmon and seafood slop between two slices of corrugated cardboard (and trying to apply for boat insurance online via the phone) in the sun I, decided to spend the afternoon in a known barbel haunt in the hope of a double.

I was using the River Wye groundbait stodgy mush stuff I concocted 7 weeks or so back, and they didn't like it. Nothing but the odd sharp chublet twang.

So I started loose feeding pellets and cubelets of meat which happened to coincide with the river taking on the task of a drainage ditch with dirty water and debris from a downpour driving through.
The tip though whacked round and the clutch was giving a touch of line before I reacted. The usual surging run interspersed with relatively easy pumping of the rod indicated a spirited but not huge barbel had taken the plunge. 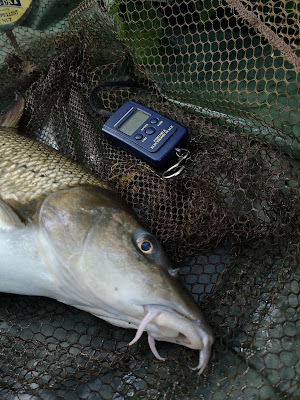 Soon in the net, he went 6lbs 13ozs and made the first day-off worthwhile. Nothing of note ensued apart from a very active and successful Kingfisher and, at dark, while packing stuff in the car, a voice, "Y'alrightmate...you'ad'oat?". "Just one", I replied, "'You done any good?". "Yeah, I just had a nine five, I wondered if you'd come and photograph it for me".

So, sliding more sideways that actually moving forward in the wheel marks now sodden from showers, the bus trundled to his swim and the deed was done. 3 deeds in fact as, in the first one, mateyboy looked somewhat unprepared, his eyes in a state of blinded flux waiting for the flash.

He'd arrived two hours before sunset and completed the business he booked-in for. Only to be admired, that approach.


Saturday/Sunday:
...and then it started to rain, and before we could draw piscatorial breath the rivers were getting distinctly wider. So the weekend proved a washout apart from a trip to the marina to sort out paperwork, etc. In fact, I don't recall Saturday actually happening.

This included selecting a mooring. There were 6 free albeit it seems a bit of a 'park where you can free for all' in reality, rather like unallocated spaces in a complex of flats but we did find out that the central pontoon is occupied by a few anglers with boats. We had the lamp on them in no time and within minutes realised the angling potential of the marina itself. The result of this being that if we catch anything to even half the size they suggest we'll be happy!

Monday:
HonGenSec had been scheming. Stillwater Barbel and Chub for the challenge was the offer. £7 a day, proper cafe, nice surroundings. Some textual negotiations ensued and before I knew it, there we were. Brollies at the ready. Flowing aerated water, that distinctly off-putting commercial water colour, manicured banks and hook-blind pet carp cruising the surface.

But we were focused. Oh yes, we could blank-out the neon signs and gold-encrusted cash registers.

I hadn't realised quite how many pet barbel there were in the puddle and expected catching one to be a fluke, but no, fishing different methods we both had two and HGS's were the best two at a cuddly 5 and 6lbs, losing another, compared to two juveniles at 3.15 for myself. A couple of nice pet crucians and roach were further reward however and at least we can now move on from that grotesque spectre, Challenge points bagged, and put it behind us! 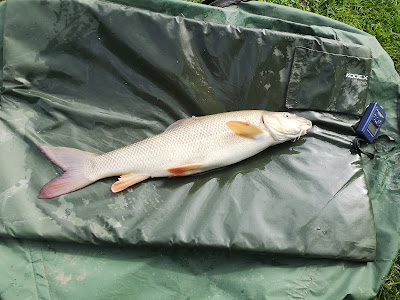 The rain commenced around 3.30pm and, once started it continued. This was a forever cloud that culminated in such heavy rain on the following day that my four minute drive to work started with me walking to the car in a few spots and after two miles it was so intense the  road was heavily awash as to drag the car sideways on invisible tarmac at every concealed lake of rainwater. Thankfully the brakes did work at the roundabout and it was neatly circumnavigated as we sailed cautiously round, spinnaker unfurled.