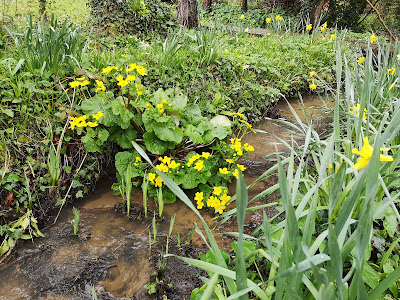 The winter of 2019/2020 will no doubt be recorded as "the wettest since records began" in due course. Everything must be labelled thus in the 21st Century; biggest, smallest, worst, best, hottest, coldest, was Ben Stokes' Ashes hundred the best innings ever? Does it really matter?

Locally in fact, in terms of human impact, it wasn't that bad but certainly the situation once the ground became inundated was such that each time it rained the rivers were quick to rise with any additional precipitation finding no traction on the land. Thus it was difficult to predict levels from one day to the next. Throw into the equation the further determining factor of falling or rising water temperatures and it made for a quite unfathomable mix on the constantly warm angling front.

On one occasion at the water, that time approaching normal level but still with a strong tow and silt-coated banks, littered, thankfully, with barely any man-made litter, a great tit struck up a seranade. It's urgent 2x2 tune as if summoning passengers to the ark this winter had conjured in the minds of many a joker.

Collectively and collaboratively, for FF&F and Artificial Lite, it had been preordained that the rivers would be targeted through the whole winter to support our forthcoming film but, never being tardy in the acceptance of a challenge, it was immensely taxing and thus worthwhile in a personal satisfaction sense when something actually happened.

It wasn't so much getting bites that was the issue but the late Peter Stone's influence over the perpetual search for those bigger fish in the swim was certainly stretched like no.6 pole elastic in a carp fight at times.

Checking weather forecasts, river levels, predicting whether water temperatures were increasing or simply increasingly cold were daily events. If they were rising and the target river was falling, then we'd be erecting our aerials for barbel on meat, if not it would be anything that swims, usually with lobworms.

Selecting swims took a good deal of wandering the banks, but some cracking (looking) options were identified and became so called 'go to' places dependent upon the above factors combined with wind direction.

As for the rest of the tale? Well, it's currently being narrated and edited.

So, season over, it has become customary to take up residence at Rocky Res. Not the prettiest of backdrops to illuminate the quality of the fishing, which has never been better, but for a few bites and the chance of decent tench (regularly up to five or six pounds), roach averaging 12ozs but often over a pound and other mix'n'match treats along the way, it's a veritable fishing sweet shop with the word 'STRIKE' running through it much like its sugary seaside namesake.

A number of us from the Warwickshire Bloggers Angling Syndicate (WBAS), took the opportunity to move toward our second anniversary, with a few bites, the winter having been so tough for all of us.

The first few minutes, waiting for that first run on goal, always seem interminable and when utilising the now standard short link heli rigs for roach the opportunity that presents itself is often blasted over the bar.

Slowly we get into it and memory serves to advise that with a suitably balanced set-up the strike isn't actually important. If the feeder and bobbin are suitably matched a dropback indication confirms the fish is hooked as it's moved the feeder; similarly the bobbin repeatedly bashing against the alarm is a fair sign too!

Beyond that, the only interest was in the fish with no bird life of note to occupy the inter-bite lulls, and it was undoubtedly the latter, the bites, that stimulated endocrine system to ooze adrenaline as, on a couple of occasions, a fish was being played to the tune of the second alarm, singing like a canary in need of a good slap. Baitrunner engaged, rod thrown off the alarm, fish going who knows where!

The wind stiffened into its own adrenaline trigger between events as dense showers billowed across the valley like a stage curtain caught in the flatulence of an open fire exit.

First time, a sight unimaginable to me just a few years ago. A roach of 1.6 sharing the bunk with a 5lb tinca. This followed later by two tench of 4.12 and 3.9, the one seemingly cradling the other. The ripped old net ('tempted to put "man" there!) was straining into shock but on neither occasion were fish lost and the effectiveness of the method was emphatically confirmed. 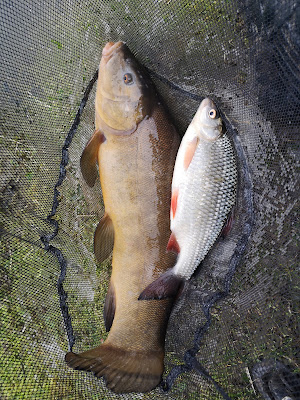 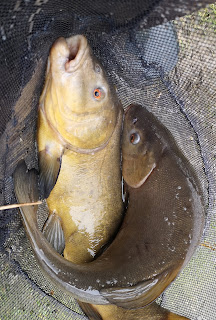 Soon of course swallows and martins will be coursing and swooping over the ripples. Warblers will be warbling on maximum volume and everything will seem fine again; while, at Rocky Res, it certainly is giving that impression already. 24lbs 8ozs of roach and tench followed by 14lbs in less that two hours on a subsequent visit is not to be sniffed at and not a fish under about half a pound.

So (why does everyone start sentences with "So" these days? I blame the scientists), approaching the end of the rifling through of various venue options, Google Earth, forecasts, river levels and the like; a break, a distraction, was required. Blogger's Challenge points had rarely been boosted through the muddy months and canal perch was one column needing to be populated with a two pounder, as a minimum, 100 points available to the taker if it exceeded two pounds and three ounces.

Cue a jolly to the banker swim. The journey brought a definite hint of a chill and it started to influence the inner workings. Parking up this was momentarily lost a the unbridled beauty of the song of the thrush accompanied the preparation as the extra layers initially felt bracingly cold against the skin. It rang out through the trudge to the waterside until he became consumed by a new urge.

Caster feed and lobworm chopped in half, and both sections impaled, against the resistance only a lobworm can display, on a delicate little size 8 forged heavy metal hook would be the tactic on my beloved 10' wand. Now usually when you snap the tip off a rod the whole thing becomes quite useless but 2" off the tip of the wand, damaged in transit, and neatly cut back to what was the penultimate eye actually improved things for this exquisite little tool in the bigger fish stakes.

No need for anything elaborate here. Simply drop the lead to the right, quiver straight out and wait for the enquiries to start while sprinkling caster heavily (for a canal) over the top. Always been partial to casters have big perch.


Poised for that first bite and suddenly that clarion of small bird alarm calls, as, sure as strike follows bite, silent death. A female sparrowhawk on her early morning sortie. A smash and grab raid before breakfast. Without a whisper she was over my head and through the confined invisible, impossible (impassable even) tunnel of a route through the facing hedge and out of sight, not a feather ruffled nor a wing beat.

Soon enough, a few tentative pulls and then the fish was clearly fully committed. A sharp strike in the hope of setting hook into boney mouth and the typical 'digging' run of a decent perch ensued. After quite a battle, the rod again served the purpose with ample reserves and this beauty was there to behold. Laying spent and sparkling under the blanket of heavy cloud 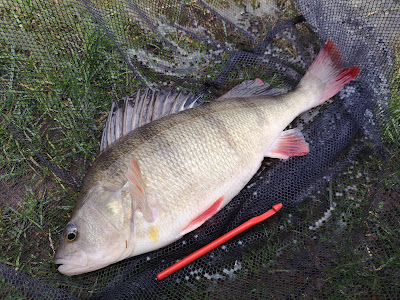 Points in the bag and a parallel apology to dear old Ben Henessy, whose 100 pointer this would usurp by just a quarter of an ounce, was certainly in order! (Still feeling guilty Ben).

Those latter suspects came as a complete surprise, so involved had the perching become but they did trigger a little reluctance to leave, even though bites had generally tailed-3off significantly.


As an angler however, that feeling of confidence that a bite could come at any moment never wanes. It is probably the greatest cause of being late for whatever follows. One more cast. Well maybe another then, if I put it just...there.

Now why did I spend all winter on the rivers exactly?