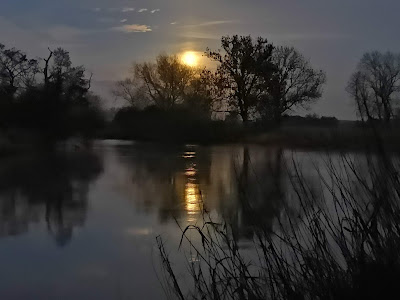 Isn't it annoying that the YouTube videos glanced at long enough to start rolling before ones very puzzled eyes find their way into your watch history by default?
I suppose I could bother to set it so that it doesn't, but then I'd be content, and how boring would that be?!
History in angling is very much at the mercy of the memory and, at that, the memories of others, often unknown and far away. Unless it is deemed by the journalistic community to be of National significance, or committed via the words of a book, the truth is often difficult to pin down.
Now, fishing information is often distorted we find, do we not?
If it's not a match angler cringingly under-'estimating' their catch, it's a carp angler claiming an unwitnessed pound roach, caught overnight of course, to be a 'three'; or that person in the tackle shop (remember those?) who just cannot recount a tale without it growing one and running away with him, or her.
If only.
Just occasionally however the truth really can be the best story, honest, and, similarly often, there's one right under one's nose lost in the vast expanses of plain sight, and so it is with this.
When I was a boy, my grandfather, 'Pap', who was blind, could be found, daily, sat on a wooden dais, with his dog 'Sal' next to him on her blanket, weaving in his outhouse (he was weaving - not the dog). 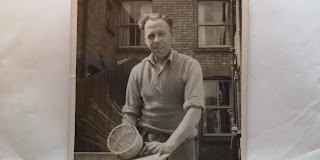 Cane would be soaking in a vast tank of black treacly water while he felt his way round the seat of a stool or chair and made a perfect job of it without ever having seen it. To a youngster, and that being all I had ever known of him, it all seemed unremarkable and it's only in recent times that I wished I had taken more notice and perhaps even learnt how to do it myself. Apart from new stools, repairs, handled shopping baskets, etc., Pap also made the most sought after fishing baskets, 'creels' to some...to measure, and they could be seen standing against the wall of this house on fine days. 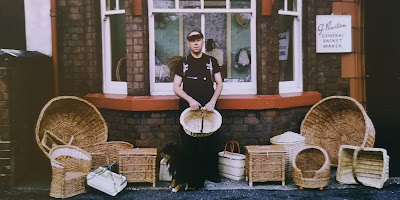 Owning such a basket was a commitment. As they dried they would creak and eventually take on a fearful lean. It was a requirement of the contract to own one of these beauties that it were to be submerged in the bath every so often to swell the cane, tighten and straighten it up. The more diligent would varnish theirs every close season and thus they took on a regal depth of woody hue that couldn't be beaten, but at a cost, they would get noticeably heavier with each coat.
The Old Duffer, as Pap's son, once had a basket made to the exact height of his flask, with 6 legs, and, once delivered, it was like the woven equivalent of a Chesterfield Settee. A work of manually-laboured art. A pale off-white cane for the panels and a richer red for the base, rim and lid.
I recall the little fella (5'-3" on a clear day) returning from its maiden voyage to announce, "It's no good. My feet didn't touch the ground!". I seem to recall he cut an inch off the legs and thus became happy again.
Many would paint their initials on the side so that they didn't get mixed-up on the club bus trip to a far flung river and end-up in someone else's shed. Things moved on though. In came vast solid fibreglass seats with a veritable rectal effigy cast into the lid. The scrawl was on the creel from that moment. Slowly, in fact probably quite quickly, baskets were discarded or handed down to sons or, more rarely then, daughters, and the brand battle in angling began in earnest. Stephens of Birmingham, Steade-fast, Brennan & Hickman. These were the forerunners of today's commercialised angling world.
So the dear old characterful basket was soon extinct. A demise caused by man, but without any hint of global warming.
Or so I thought.
A while back The Old Duffer's old fishing pal sadly passed. He was visibly shaken by the event and, as a memorial to their many years sat on sunlit banks together, his dear wife, 'Aunty Ann', she who once got her dentures stuck together on the riverbank on a Quality Street toffee, to the concerned accompaniment of cackling friends, gave the basket to him. A varnished one, for Arthur was indeed diligent. A man who always had the best cars but also the most terrifying cough that put my little heart in my mouth as a boy whenever he burst into one of his explosive, crimson-faced fits.
Time passed, The Old Duffer hung up his float tube, and now finds his entertainment at his marvelous care home in dominoes, quoits or snakes and ladders, but the reaction to an angling tale is always there via a twinkle in his eyes and fleeting smile, "That's good", he'll say, "I like that".
Slowly, over two years, his tackle has been distributed among the needy, but Arthur's basket?, well that stayed put and, as the ultimate inheritee, it recently came into and under my guardianship.
On Christmas day that great giver of gifts from the North left me with a dream materialised.
A split cane rod, or two. 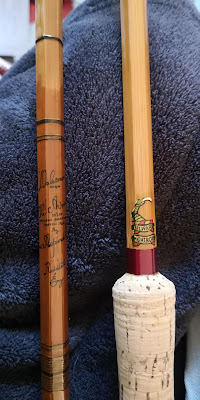 10'-6" of dreamy, historic and quite beautiful, handcrafted exquisiossity by way of J. Aspinall's 'Avondale' float rod (thanks again Andrew!) comprised one half of the pair. Matched with the J. W. Young 'Trudex' centrepin acquired about 2 years ago (thanks Martin!) there was only one conclusion... 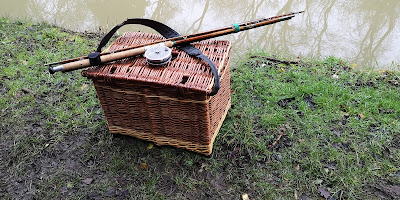 The antique rod and reel then magically conjured a single half pound skimmer from a disgustingly-coloured Oxford Canal but it was a lovely if brief session, with a warm glow in the frost and all made possible by the beautifully preserved Arthur's Basket.
It was only right.