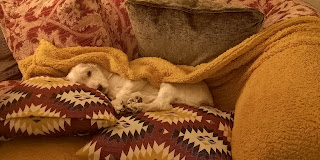 The first with any snow on the ground was something of a disappointment as the snow lay neither deep, nor crisp and more thinly patchy than even

At the second attempt, in proper crunchy, creaky, fresh snow, the anticipated satisfaction, if not more, was all around

Opportunities in more recent times have been more limited however with less non-work, snow-hit days available for such pursuits

Last weekend, the first of 2021, was not a contender but an afternoon session of around two hours at Rocky Res was always going to be a challenge even without any weather constraints at the time of year

Hoping for quality roach at 3°C with light showers wafting in behind me from the west, two open-end feeders were deployed at distance with 18 hooks on short helicopter links and red rubber maggots offering the natural presentation of an unnatural snack

Flurries of departing gulls headed to the nationally significant roost Draycote Water as the evening drew in. Coots were in and out of the water at each passing dog walker

Four roach, three of them noteworthy, topped to my left as dusk hinted at its intentions and at a distance that suggested the feeders sat in the right area

As the afternoon progressed so the quality of the angling regressed to the sort of state that left a feeling of hopelessness. It became seriously cold and at sunset, when the bell tolls for we lesser mortals without night tickets to packaway, odd pellets of snow started to hit the water, and. as I reached for various items to tuck them under the umbrella, the left-hand alarm struck up a shocking shrill chirp and an urgent glance down witnessed the bobbin hit the rest and drop back to the ground, confirming a self-hooked fish

Lifting the rod, a very gingerly-played fish was slowly inched toward the bank, or so it was hoped. It became increasingly apparent that this probably was not the ultimate target and, as thoughts turned to the landing net, it took on that unmistakable increased power closer to the bank that can only mean one thing 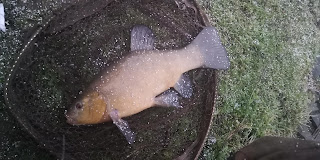 Who'd've thought it. Not a huge fish at 3lbs 9ozs but a winter tench, a January tench and a snow sprinkled tench too, all in one freezing finale to an otherwise fish free afternoon.

Which surely supports the adage, "Never give up"!