Rediscovery of a Seasons End 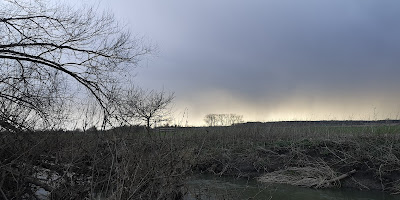 The Discovery was retrieved from the insurance company's own repair workshop last week. Like new, it was. Immaculate, smelling like a car in a showroom and complete with all contents, maybe somewhat stupidly, left inside and, on a personal level, we are whole again...just in time to enjoy the end of the season

The River Leam never ceases to engage me fully. Whether on the bank or dreaming of it, the little river is such a tease.

There is a length of maybe three swims on our Syndicate stretch that have intrigued me for the 2 or 3 years we've had access to it.

It seems perfect. Steady flow, smooth glide, nice depth at 3ft plus along its length and edged by undercut grass beds on the far steep bank (where it hadn't caved-in) been and lined with rushes nearside.

I'd been drawn to it numerous times but, not until this winter, had it produced so much as a bite!

A bit of a dabble at the downstream end, where the current disappears under a goat willow, in passing, one early autumn day 2020 actually brought one of those surprising bites where one is going through the motions, expecting nothing from the whole charade, and yet it spoils things by damned well working!

Not only did the tip twitch but it proved a decent roach. The very fish that should be there. 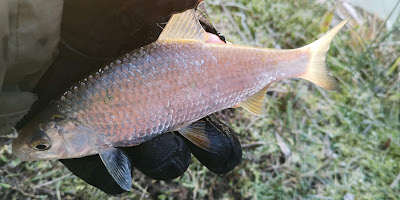 Since that day there has not been a biteless visit to the glide and, although it remains seemingly impossible to ensnare more than two fish per swim, it is somewhat gratifying that they are showing from there now.

My guess is that I've probably tried it at the wrong time previously and that it would seem logical for fish to move there in winter, with a bit more water on.

A surprise chub of 2.14 was welcome on one occasion but with that, and one or two other fruitful swims, the roach potential of this little stretch, reachable within 5 miles of home while travelling has been constrained by Covid, has been evident. Odd fish have been small but a good proportion of them have been over 6ozs and up to a peak of 11ozs. Nothing to threaten the stretch PB of a pound and a few drams, nor indeed the river best at 1.4.6, but nice fish nevertheless and very enjoyable when options are few. 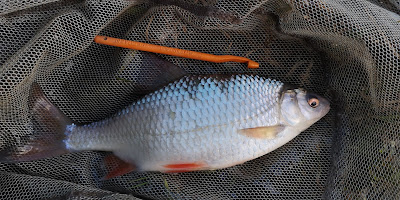 ...and so it continued until the end of the season, punctuated by some nice dace to 7ozs.

A burst of (over?) confidence led to a closing day rush of blood.

It would be a three-pronged attack on river best chub (3.15), roach (1.4) and dace (8ozs) with liquidised bread in a tiny 10g feeder on the wand in various areas of the main flow and creases while in a deep slack the treat of a huge piece of crust would lay, irresistibly waving in the gentle swirl of the current.

A fellow Syndicate member, initially suspected as a poacher, was ensconced and awaiting the action when I arrived. A brief chat was followed by a couple of other snatches of conversation between bites which culminated a bizarrely in-depth conflab on rare circa 1980 records, from The Undertones via XTC to Blue Rondo a la Turk. Not the every day discussion for sure but great, and quite passionate, reminiscing as it turned-out.

Three proper bites and two roach of seven ounces and ten ounces immediately after were the limit for the last session of what has been a necessarily limted and therefore patchy season to say the least. Both were taken on the micro-feeder option with not so much as an aquatic sneeze in the direction of the crust labelled, "Big Chub".

The journey home, was not exactly one spent floating on the basis of the result but it was more than comforting to have the bus back, and all that it entails.