Marvel at the Natural World 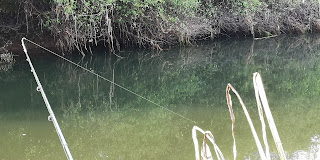 Something has been troubling me.

Not a recent thing. It's been there for years, a decade, or more.

But it's been closer to being tangible this autumn, and at last I believe I've grasped it.

As sure as three pheasants just traversed the nettle-fringed river, bursting from semi-improved grassland into Himalayan balsam. I've grasped it, and, as I ruminate, a train rattles the same way. It's dark now, and the warmly-lit windows are suggestive of an unimaginable cosiness, yet blunted by thoughts of the smell of unwashed hair and trainers.

Getting out has always been about the countryside (going out having been an altogether different proposition), but the impossibility of writing when faced with the daily challenges of life this past year or more has been prohibitive.

I am grateful for a lack of  bites this evening as the time is well spent in a brief spell of that elusive clear riparian thought so noticeably absent in summer. 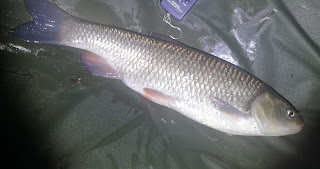 It had always been apparent that being out was preferable in itself, but why? What was it that made it so?

As a teenager the whole feeling of match angling from kit to fish, via the buzz of the challenge and the glow of those little victories such as beating the anglers each side, was the draw. Tiny spools of 8oz(!) french line by mail order from Don's of Edmonton, a Ray Mumford pole and floats, the iconic 3 section Shakespeare landing net handle with white grip, gold and black taping, and spoon net. The race for 100 fish or more and removing necessarily barbless hooks in a flash for efficiency...and never a thought of big fish. It was all about bites.

Through all of this though (and before) there ran something that continued, and continues, as a perfect thread, unknotted by time, as straight as a line between rod tip and charging quarry, and it could be found in moments such as these:

All of these things have that common 'green' thread known as the natural world woven through them.

So is it simply this I've been seeking, the natural world?, and why so strong like the twizzle of a  magnet facing away from steel?

So what is "The Natural World"?

Fundamentally the starting point must be whether we agree that man is part of the natural world, and that everything 'he' does is therefore natural too, or whether man's universal arrogance makes everything during the time of his presence, the Anthropocene, unnatural.

For me it is unquestionably the latter, the very notion that we could have driven a planet to such a state that our own very existence is challenged, is beyond comprehension and all in the pursuit of the advancement of a now largely imagined existence. An existence played out almost entirely in his head. Is man's brain is too big for his own good?

Reverting to the man-introduced pheasants and the man-made train...

The river banks dominated by nettles the result of a nitrate-rich rooting medium created by man. 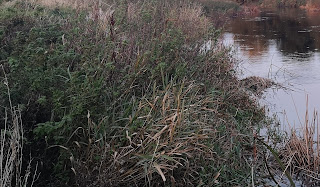 Semi-improved grassland. 'Improved' for agricultural use in pursuit of meat faster, better, and more valuable than ever before

The Himalyan balsam, a now out of control invasive species.

In that brief opening description is captured the whole conundrum and hidden therein too is the nub of my genuine crisis.

It is not the natural world as we know it that I seek and have sought, as by that true contentment is never achieved. Everywhere, and increasingly so, it is the pursuit of the avoidance of the trappings of man.

I was sat at a reservoir this past spring and manoeuvred into a position where I felt detached from man. The view of a house in the distance could be avoided if the small willow to my left concealed it and I sent a photograph to The Lady Burton expressing the fact. Yet there I was, briefly believing I had found it, whilst looking out over what was once an untouched valley shaped by glaciers and then carved by a river of vigour and health, dominated by woodland and accompanied by a vast population of other life that we cannot begin to perceive.

...and that is the key to it, the unending need to get outside in the previously subconscious vain hope of finding it. Finding an unmolested, virginal, unimaginably vibrant natural world that Smithsonian states is only present over 17% of the earth's surface (but even that doesn't go unaffected in some form or other, if only by dint of the changing weather and invisible impacts blown by corrosive winds from elsewhere).

So, next time we hear the claim that it's not too late to save the earth maybe we should ask ourselves what it is that needs to be saved. It cannot possibly be man, what use is he? He cannot right this wrong so great as to be beyond his arrogant wit to comprehend either.

The fact, tucked away in the vaults of all of our minds with the lost instincts and triggers we fail to realise are there, is that it's gone. The world when the earth and it's grateful inhabitants all lived within their and each others means, a true and naturally evolving ecology, is gone, and the process can only reboot when man exits stage right.