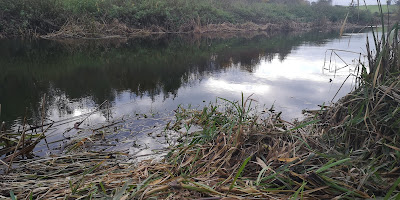 The moon was brightening and I thought I could sense something breathing, but the sound was continually drowned-out by the sky, throbbing with the lumpy drone of a hundred distant combustion engines

Now the river, at its narrowest accelerated channel, glinted silver as sunlight struck it via the surface of that early evening moon; each turbulent surge outlined and shrinking as it subsided into darkness

Through the summer it is readily forgotten how thoroughly the cup of calm can be drained right down to the very last drop by the riverside at dusk. Everything settles to roost and a whole new everything soon stirs.

Rooks and jackdaws, tonight over a thousand starling, and of course the pheasants' unpleasant cocophony as they crash-in to perches, often inappropriately selected and then deselected, are the regular proponents of the changing guard.

No sooner have they handed over to the night-shift than the rustling and chewing of rodents; the last minute piscean displays of ebullience; then the cries, hoots and screeches of owls; moorhen scrambling into bushes or climbing rushes all comprise the, albeit brief, B-side of the day's soundtrack before a general silence descends.

On two consecutive trips the local barn owl flew straight to me as if to check-out this new and mobile feature of the usually unchanged landscape. What a sight, as they floated without even the slightest sound on moth-like wings. Unsatisfied on both occasions each perched nearby to survey the scene but lost interest as efficiently as they gained it. Voles called (now when I say, "Voles called", I don't mean...well, anyway).

The little grebe, a ubiquitous tiny river bird, seemingly ever present in the colder months, is easily missed or mistaken for a crashing chub or rolling roach, but with stealth they can be seen in between the reed stems diving for the last water boatmen of summer or perhaps winter  sticklebacks to sustain their Slender yet impossibly buoyant selves.

The evening was frustrating in the extreme. It's not often I can say I've had 15 bites when chubbing with meat but conversely quite usual to say I've had just the one fish. This however was that day. The first three or four bites were sail-aways yet were struck into nothing. Slow to learn, I held back and allowed the next bite to develop more fully, managing to hook and land, via a crisis-let with a weedbed, an immaculate chub of 3lbs 13ozs 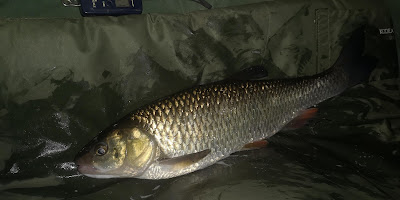 I was no better off afterwards, as the bites became increasingly short, sharp and stacatto, such that I began to consider the possibility of eels. HonGenSec suggested signal crayfish, which I suppose could have been trying to swim off with the bait and then quickly losing grip, neatly reflecting my own demeanour as I sloped away into the mist of the darkening field, largely defeated 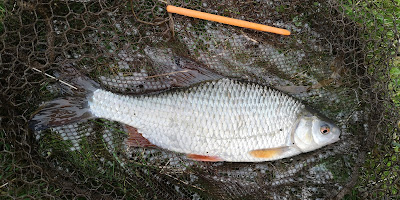 To be sat there again; feet in the rushy margins, backside on the bank; was like the reopening of the sweet shop hoping mint humbugs were back in stock.

The Leam is, as they say, "A funny river"

The slightest miscue and she appears devoid of life. Her appetite generally on the reluctant side of anorexic except during those occasional times when her complexion suggests a flush of rude and ravenous health.

This weekend was clearly the former, as she lay chilled in serpentine stillness. Visibility was two feet plus, far too clear for more than the odd fish per swim, with any panic palpable, but hope would be a companion.

In flight, fieldfare and the seeping redwing,

flushed from hawthorn and willow, scatter in random abandon at the first morning sight of man. Meadow pipit and skylark continue the winter spread as they filter throughout the land.

It had been that long.

20 minutes of 10g feeder deployment and no bites to show for it, the river low and clear, I slip into the old banker swim. A change of approach to boot. 4 finger blobs of mash, scattered such that they would entice the quarry from its lair, drifted down in the negligible gentle flow to the edge of a previously significant feature, now depleted. There was something about it though, something imperceptible that made it attractive to both chub and roach in the past and so there was no reason to conclude that this would still be the case; perhaps the bed was scoured gravel?

The second? Accurate and short of the spot imagined where the feed came to rest. Ideal.

As is the case with small rivers, one tends to seek-out micro-quivertips to indicate the tiniest of twitches, but when the fish is worth the effort it could put a curve in a 2oz tip without any trouble. This bite was to be no different; the customary tremble closely pursued by a wrap around and what felt like a proper combatant was engaged.

Now the wand isn't made for specimen fishing but it copes adequately with fish up to 3lbs and can subdue bigger fish in open water but this was the Leam, all rushy margins and snag-ridden runs. Initially the fish didn't show any desire for the vegetative route of escape but as it approached the net instinct clearly took hold and there it was being dragged to the surface and into the net before we had to offer it the option of releasing itself before digging it from the debris.

The opening fish of the new era then was chub of 2lbs 13ozs, and a very welcome start! 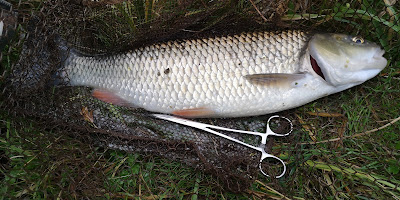 Usually under such circumstances I might give it one more cast or I might move on immediately. The former was favoured, given the re-acquaintance with the stretch, and in went a tasty fresh flake of Jonathan's best. This time the hook bait lodged in the leading edge of the feature and the heart fluttered like a cabbage white under the gaze of a wren but one gentle tweak and it flipped neatly out and sunk right next to the snag. Needless to say, when such luck abounds, it wasn't long before the tip was arching downstream again and another decent fish was hooked. At first it was a roach, then a chub of a pound or more but the head-shaking didn't seem right and, as it came into view, it was clearly a more than decent roach. Then it turned into chub again and dived into the dead rushes. The landing net turned excavator scooped the fish and all around it up, and at the scales it proved the first river pounder of the season at 1.1.8 and the world was good; for five minutes there was no COVID, no climate crisis and no war. Anywhere.

A chance call to the farmer had resulted in the syndicate getting access to this excellent stretch of the river where the features almost outnumber fish and offer so many options as to make one all boggly of mind.

As I tested another glide I was feeling that loss of engagement, that prelude to the trudge back to the tank, and through the distraction I became aware of a huge but somehow gentle swirl to my right next to the fallen log the bait rested beneath. Thinking initially, "Giant chub", I became conscious of a seal-like shape slipping underwater on the far side between the, now brown, rushes flat to the surface where up-periscoped an old, distinctly grey haired, Labrador head, or so it seemed, and this guy was not happy.

"Humpf", he exclaimed, inwardly, and all breath-y like, "What's going on here? That wasn't there yesterday!"

His neck so unfathomably long and able to project so far out of the water as to be unreal, this was the biggest dog otter one could imagine, with rolls in his neck like a 60-year old Mike Tyson. He regarded me, for what seemed quite some time, as I too regarded him - with sheer disbelief - but then, he was gone, and the bubble of apparent fantasy burst.