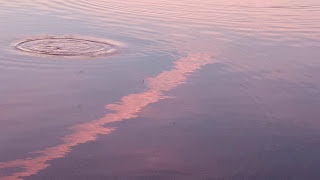 He was a naturally scruffy and imperfect little soul. Black and grey hair matted and his shins often coated in spare gravy 'for later'. The dandruff fell from his skin like salt from a pot and yet he was the dearest of chaps.

His eating habits were as equally rapid as messy, but always preceded by an all-but terminal, physically evident fear that the food being prepared would not be for him.

On trips, he would set his more perfectly formed big brother off in howling sessions such that would make the rest of the family resort to headphones, conveying the message he was here, there, or anywhere for that matter.

This led me to wonder why dogs howl.

Some brief research made the discovery that it was thought to be to announce their presence. A kind of, "We're over here, in case any of you can't find us", message. It keeps the pack safe and in numbers.

Anglers, and others no doubt, have often pondered the reason for fish to 'top', the written word on angling often referring to this as 'priming' (though I have no idea why), that is the tenancy for individual fish to come to the surface, roll over, causing the telltale concentric rings of outward moving ripples, and return to the depths.

Given that everything happens for a reason it seems a little puzzling at first glance. What is the evolutionary advantage in exposing one's self to risk of predation by such an action?

Peak times for such activity are dawn and dusk but it can also go on throughout the day. Again, the question is, "Why?".

It's not a feeding activity. Fish that are feeding at the surace have a quite different form of action, more aggressive and 'splashy', and why don't predatory fish do it? Pike, and perch?

It's intensity can vary between species. Chub will crash at the surface at dusk, whereas roach are the gentlest exponents of the craft.

A subject I have pondered for a lifetime, on and off, has drawn me to one conclusion that it is the direct equivalent of dogs howling. A message by the unspeaking to avoid the unspeakable.

"If you lost touch or are passing through, come and join us, we're safer together".

It certainly seems to be promoted by stillness and light levels but should not be confused with the propensity of rudd to surface feed avidly at dusk, especially where food in the form of invertebrates has drifted into a certain part of a stillwater. Rudd are generally very  unsubtle toppers as are roachXbream hybrids!

Apart from the sight of large roach breaking surface I have to say the one that makes my inner soft spot glow is the sight and sound of stone loach "fripping" at dusk as they burst the surface of streams in a display of apparent delight in feeling sufficient confidence to slip the lair at dusk.

Whatever the purpose of the habitual routine, it is clearly one trait that has stood some non-predatory fish species the test of millions of years' existence.