A Flood of Opportunities 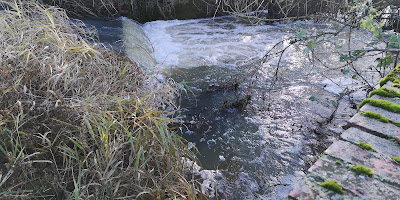 The challenge of extracting fish from flooded rivers is one of the greatest. Not in that it's the most difficult but in the measure of the pleasure of success against the conditions

The temptation to say, "Against the Odds", was almost irresistible but that would have been lazy and not necessarily true

In these parts the challenge of catching decent 'Stone-fish*' in clear, low, slow flowing water is far greater than in floodwater.

In floodwater the options are narrowed and the target wider. The former by way of the river dictating the terms of engagement whereas the latter is a result of the fish being pushed into area where they might tightly shoal.

If I had to choose a single type of fishing to keep me amused this would be high on the list and yet fishing in such circumstances only seems to meet with the unquestioning acceptance a certain type of angler. Generally one of experience, one who has been there before and isn't, some might say 'naturally,' put off by the sight of a raging river.

Matches, thankfully now back in fashion on rivers, are frequently cancelled under such conditions and, as canal match anglers we used to welcome such days that would boost the turn-out without necessarily boosting the chances of the extra cohort. It had to be appreciated though that there is a distinct risk in running matches in such circumstances that cannot be ignored.

As an individual however, not being tied to a peg, so to speak, opens up a world of safe opportunity with requisite care.

In the previous life alluded to above I recall fishing high rivers rarely, even during spells as 'a river angler' this was the case. In fact I only recall three such occasions. One on the a featureless stretch of the middle Trent in a club match, one on the Nene just below Northampton, and a third also on the Nene somewhere further downstream in an Open match. These examples perfectly demonstrate the match against individual situations.

Trent: River high, 4' from top of bank. Inexperienced, I felt fishing where an angler would usually be sat, with maggots (that's all we had) would be best as the main flow rushed past. No choice but to sit there and spend 5 hours praying for someone to end the match early.

Nene: Pleasure session. The river, a recent new cutting of the main flow, was seriously enjoying itself while The Old Duffer and I sat in a side arm taking advantage of fish, including tench and carp, sheltering from the torrent in steady turbid depths.

Nene: Open. I drew above a little slack back eddy with a eye that was relatively still. Circumspect feed with groundbait produced a couple of skimmers and some roach that made the day worthwhile with a 3lbs catch; while Ray Mumford fished a long pole into a far bank slack beyond the main flow to take 6lbs of roach on bread. 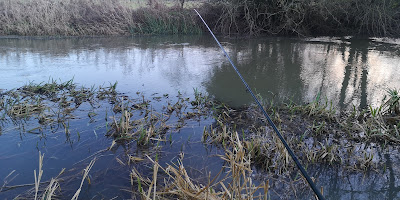 The above indicate the vagaries of the relative circumstances. One can be lucky in a match, but the likelihood is (if it goes ahead) that only a few pegs will be genuinely fishable but, alone, the freedom to select a swim or a series of swims makes the deal altogether more potentially profitable.

Having only fished high rivers in earnest for around 7 or 8 seasons the prospect now fills me with nothing but excitement.

Such angling is precisely what it should be. Nothing is the same and one has to think on the hoof and adapt to the constraints of each opportunity presenting itself. Often a single swim can offer multiple possibilities - a slack bay, a crease, a steady glide, gaps between overhanging trees, rafts, sluggish water immediately downstream of features such as reedbeds, etc.

Methods are equally flexible although a static bait of bread, worm or meat is likely to be preferred and the scale of the quarry increased from that most prevalent in the normal level river. It certainly isn't a time to fiddle around with light rigs and small hooks as the fish willing to offer their assistance to the cause will likely be the mothers and fathers of those we caught last week. 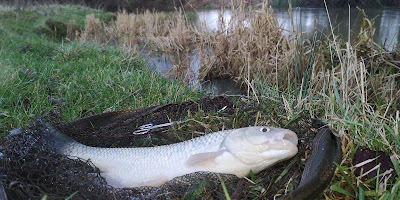 Sounding too good to be true I accept there are negative aspects. Firstly, if the flood is caused by an influx of water colder than the pre-existing river temperature, it will usually kill sport until the fish acclimatise and start to forage. This could take a week or more. If the incoming water is warmer however success can be immediate provided, on rising levels, the debris careering through can be avoided. Secondly, if the water is too coloured, it will be difficult to tempt a bite.

Float fishing is usually a non-option unless float leger or pole feeder are employed as the quivertip becomes the primary source of entertainment when pursuing targets that are only limited by the bait in use, i.e., both bream species, hybrids, roach, chub, dace on bread; chub, barbel, eels, bream on meat and pretty much anything but mainly perch and chub on lobworms. One thing is fundamentally clear however and that is that tiny baits are pointless when the river is up.

The use of a bait dropper becomes essential when the feeder is not the preference and what an under used, neglected, item this is. Fishing bread mash in a flood and in a feeder, or trying to introduce a few snippets of worm would be impossible were it not for these ingenious devices. So much so that one would be well advised to set-up a dedicated rod for its use; one that is not so soft as to make its deployment a matter of luck rather than skill.

Thinking things through further, pb's of Leam  perch and roach have come in high water conditions as well as Avon barbel, chub and silver bream, the latter of course being known to be at it's most gullible in coloured water. 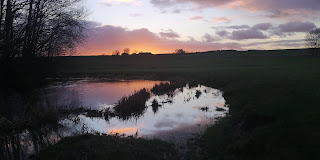 As I write, a short shower rattles on the window at 6°C ensuring that the local rivers, Warks Avon and Leam, will maintain their high state going into the weekend. By then it will have been five days since the 4°C storm struck and it should be time, combined with further increasing air temperatures, receding flow and water levels, to glean a Stone-fish or two from a few likely havens.

It remains to be seen, of course, but I'm up for it if you are?!

*'Stone-fish' - a term derived from the writings of the late Peter Stone, who espoused the theory that it is usually possible to catch the bigger fish from a swim...and he was right.