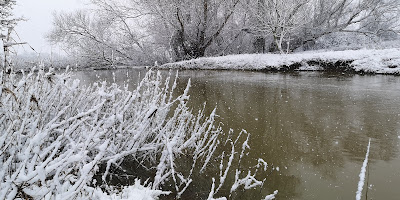 Yesterday it was 11 degrees C, overcast, breezy and yet, having double-checked, it was still January, not April.
Last weekend however...as the frost formed a sparkling coat on Saturday evening, the likely swim for Sunday was labelled
Leam levels had dropped significantly at the end of the week and, while water temperatures had been rising, with it a sudden change reverted it back to a meagre 4°C
Identifying fishable slacks with a known clean river bed was a challenge but, on the basis that fish don't move far from their regular haunts, the first hole selected was where a small backwater met the main flow coming straight towards the bank and leaving a little slack perfect for the pole leger at 10-11m down the side of some linear phragmites growth while, to the west, a flock of 30 lapwing floated in a swirling spiral of apparent indecision
A gentle breeze blew with the main flow and brought a brief sprinkling of snow pellets to wake the fingers and numb the face. Woodpeckers 'kecked' between the naked ash boughs as a male buzzard braked on urgent wings to briefly take-up position below them
A Covid-inflicted alternative lobworm supplier had delivered a wizened and partly dead batch of otherwise prime turbid-water bait in the morning but, even had it been vigorous and healthy, chances were slim
A sharp suck of freezing air, a split second after the snow, punctuated a deeply felt swirl in the slack. Not the kind of action one might anticipate but a trend that was to typify the weekend
Soon, another crash down stream, but this time a precariously balanced piece of floodwater flotsam had become dislodged, fallen and resurfaced like a pole dropped, end-on, off a quay
Lifting the rig, set at around 12' with the water on, would occasionally meet with a snag but nothing was lost and the odd thing was gained
The turbulence of the swim became noticeably random once we became properly acquainted and, as one upsurge dragged the bite marker off line, like a grounded child clinging onto a roundabout, a chub of around two pounds burst the boil and surfed for 4 or 5 feet
Why such activity in such a cold, tumultuous and treacly environment is beyond comprehension but that was not the end of it
Nothing so exciting as a bite interrupted proceedings but that wasn't a deterrent to this PB clinging on for its life on one lift out of the bait. In fact it looked like a leaf until it started wriggling madly... 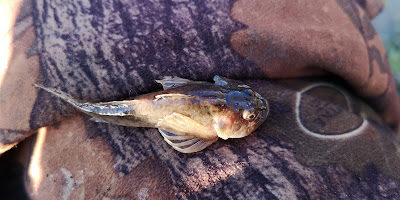 I'm sure a tiny one of these little beauties, that wouldn't look out of place in a rockpool, had graced the palm years before, but sadly the grey matter stretcheth not sufficiently to recall it
Another couple of swims were tried but the dead or dying bait left little confidence in the jar so an 'X' was marked on the spot for the Sunday and a laboured walk back across a crispening sodden meadow drew the evening to a close
----
Next morning, for no apparent reason, the 'X' wasn't appealing and the lower limbs headed the opposite way, downstream, where three nice slacks caught the eye and were gently tickled into, the hope of, action for half an hour or so each on a straight lead having attempted to fish the Saturday swim again but, with the water about a foot lower, it was pretty much unfishable due to the changed turbulence and after losing the whole pole rig that implement was thrown into the Land Rover and out came the trusty Avon Quiver. To no avail either, of course!
Meanwhile, as warned by the wireless from London, the sky burned a smokeless fire from the east. A prelude to the epilogue 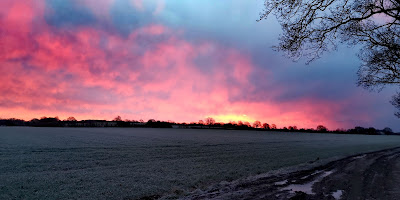 While irritating the second swim such that it's mouth became clamped shut, more fish were splashing under an overhanging bush on a bend tight to the bank below me
More inexplicable behaviour at a slightly reduced 3.8degC water temperature
Moving to swim 4 of the session snow fell and fell heavily such that soon two inches of the fluffiest stuff had built up on all that was previously in view. Loose items such bait dropper, scissors and chopping pot had to be dug from the whiteness to be rediscovered and the wider scene became immediately Christmassy, a month too late 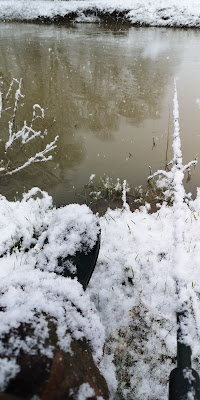 Nothing moved for some time until a pair of Jackdaw flapped west followed a loose flock of Carrion crow. I flicked the rod tip to reveal a quiver again, just in the faintest hope, but that was all it would be. There really was no chance of a bite but the experience of sitting through a complete snowstorm from start, watching it build up, to walking back through its freshly deposited crunchiness was a rare event and, as I exchanged pleasantries with Multidogman by the car, we were in firm agreement that the opportunity to be out in it was not to be missed
How much of our lives do we spend constrained by bricks and mortar in ignorance of the true realities of life?
----
His Artificial Liteness, Eric Weight, has again been working his magic with minimal input from yours truly based on autumnal angling fare.
The results can be viewed here or via the tab at the top of the page
Posted by George Burton at 21:47